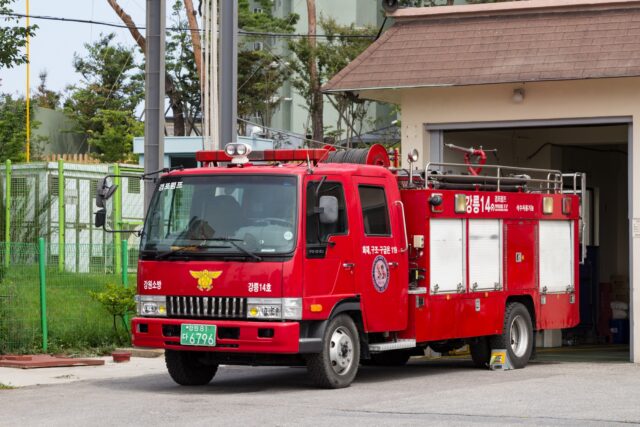 Fire trucks are a category of an emergency vehicle that carries specialized equipment for extinguishing fires, mitigating water damage from firefighting efforts, and providing other specialized services to firefighters.

In addition to fire apparatus (fire engines), the term “fire truck” is often used by fire departments to refer to smaller emergency vehicles such as wildland fire apparatus or “pumpers,” which carry specialized equipment such as pumps and nozzles so they can operate more effectively in rugged terrain.

A pumper truck is a standard vehicle with a pump and tank used by firefighters. Pumper trucks were initially drawn by horses but replaced over time with motorized vehicles.

Today’s pumpers are typically equipped with a tank and hose, usually two hose reels. Tanker or tanker truck A tanker is an apparatus designed to transport large amounts of water or other liquids to a fire scene. Most modern tankers can carry 1,500 to 3,000 US gallons (5,700 l) of water. Some older models have carried as much as 12,000 US gallons (45,400 l) of water. Pump and trailer units may be trailers that carry smaller pumps and tenders than those mounted on the chassis of fire engines.

An engine is a vehicle designed to transport firefighters to an incident scene and provide them with equipment needed when they arrive. Engines usually contain some pump and a tank. Ladder A ladder truck is a vehicle that carries ladders and large hydraulic extension devices for gaining access to, or ventilation of, fires that are on the upper floors of buildings.

Hotlines in smaller towns and cities, particularly those with volunteer fire departments and fire apparatus, may be little more than pumps on trucks. More commonly found in larger cities, they carry hoses that can stretch up to 2000 feet (610 m) long so firefighters can attack ablaze from a safe distance. Fireboat Small boats kept near tidal areas for emergency use by fire departments

Fire departments sometimes have fireboats that are custom-designed for aquatic rescues and firefighting. Any vessel or structure capable of carrying water, whether a boat, plane, helicopter, tank truck, etc., can be used as a fireboat. Fireboats are generally found near large bodies of water but can also be operated on lakes and rivers. They must maintain enough freeboard to operate in the area without getting swamped by the water’s surface at low tide. Firefighters may use different boats ranging from inflatable rafts to rigid-hulled inflatable boats (RHIB) depending on jurisdiction and type operation needed.

A dispatcher works in the station to receive calls for service and coordinate responses. They also prepare and maintain records associated with these activities.

Firefighters who have been sworn in may respond independently with only a verbal report necessary at the station for record-keeping until a second unit arrives. This practice is more common in rural areas where response times are low due to proximity but increases the risk to the firefighter who responds alone. Proper procedures require that an officer accompany any crew member responding.

Cab-Type Fire Apparatus is the term used in the New York City Fire Department (FDNY) for their apparatus. This designates that the apparatus has a cab built into the rear to hold its control panels, air compressor, and other equipment. It can also be considered an optical illusion in which it appears that the truck has two smokestacks; in actuality, there are none.

American LaFrance’s response to this was by designing a new type of vehicle that would make its fire engines more powerful. It introduced the open cab (a la steam locomotives), which created a better vision for firefighters, and allowed them easier access with ladders at the back. This feature became standard practice in all modern fire trucks today.

American LaFrance Eagle Aerial Ladder Truck also during this time, American LaFrance developed the tiller aerial, which was the first tiller-steered fire truck. This allowed the driver to steer the truck from behind rather than walk around it to get to its front.  American LaFrance began employing Selden Fleet weaver as an outside consultant who helped develop a two-cylinder engine for their new line of trucks. It is said that Selden, who had worked at Corliss, based his engine style on that one.

Which Gym Equipment Is Save To Use At Home?